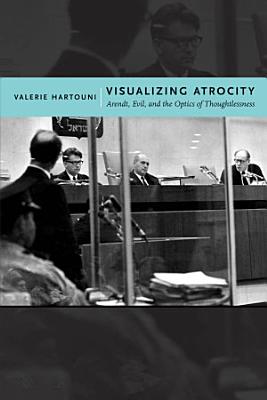 Visualizing Atrocity takes Hannah Arendt’s provocative and polarizing account of the 1961 trial of Nazi official Adolf Eichmann as its point of departure for reassessing some of the serviceable myths that have come to shape and limit our understanding both of the Nazi genocide and totalitarianism’s broader, constitutive, and recurrent features. These myths are inextricably tied to and reinforced viscerally by the atrocity imagery that emerged with the liberation of the concentration camps at the war’s end and played an especially important, evidentiary role in the postwar trials of perpetrators. At the 1945 Nuremberg Tribunal, particular practices of looking and seeing were first established with respect to these images that were later reinforced and institutionalized through Eichmann’s trial in Jerusalem as simply part of the fabric of historical fact. They have come to constitute a certain visual rhetoric that now circumscribes the moral and political fields and powerfully assists in contemporary mythmaking about how we know genocide and what is permitted to count as such. In contrast, Arendt’s claims about the “banality of evil” work to disrupt this visual rhetoric. More significantly still, they direct our attention well beyond the figure of Eichmann to a world organized now as then by practices and processes that while designed to sustain and even enhance life work as well to efface it.

This book assesses the role aesthetic factors play in shaping what forms of mass violence are viewed as international crimes.

AcknowledgmentsI: Collective Memories, Images, and the Atrocity of War II: Before the Liberation: Journalism, Photography, and the Early Coverage of Atrocity II

Beyond the Centaur questions the accuracy and usefulness of the virtually unquestioned ancient consensus that persons are composed of unequally valued, hierarch

How films on the Holocaust gave birth to a new cinematic genre.

An eminent psychiatrist delves into the minds of Nazi leadership in “a fresh look at the nature of wickedness, and at our attempts to explain it” (Sir Simon

Staying with the Trouble

The religious landscape in Europe is changing dramatically. While the authority of institutional religion has weakened, a growing number of people now desire in

This proposes a new framework for atrocity prevention, featuring scholars from around the globe including three former UN special advisers.

Combining case studies with theoretical and philosophical insights, this book explores the role of photography in representing conflict and genocide, both durin