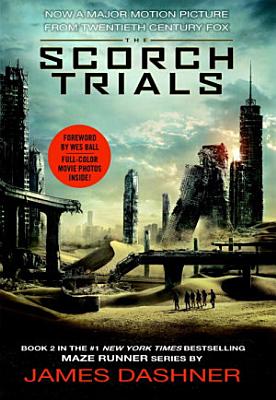 Book two in the blockbuster Maze Runner series that spawned a movie franchise and ushered in a worldwide phenomenon! This special movie tie-in edition includes an eight-page full-color insert with photos from the film. And don’t miss The Fever Code, the highly-anticipated series conclusion that finally reveals the story of how the maze was built! Thomas was sure that escape from the Maze would mean freedom for him and the Gladers. But WICKED isn’t done yet. Phase Two has just begun. The Scorch. The Gladers have two weeks to cross through the Scorch—the most burned-out section of the world. And WICKED has made sure to adjust the variables and stack the odds against them. There are others now. Their survival depends on the Gladers’ destruction—and they’re determined to survive. Friendships will be tested. Loyalties will be broken. All bets are off. The Maze Runner and Maze Runner: The Scorch Trials are now major motion pictures featuring the star of MTV's Teen Wolf, Dylan O’Brien; Kaya Scodelario; Aml Ameen; Will Poulter; and Thomas Brodie-Sangster. The third movie, Maze Runner: The Death Cure, will hit screens in 2018. Also look for James Dashner’s edge-of-your-seat MORTALITY DOCTRINE series! Praise for the Maze Runner series: A #1 New York Times Bestselling Series A USA Today Bestseller A Kirkus Reviews Best Teen Book of the Year An ALA-YASLA Best Fiction for Young Adults Book An ALA-YALSA Quick Pick “[A] mysterious survival saga that passionate fans describe as a fusion of Lord of the Flies, The Hunger Games, and Lost.” —EW “Wonderful action writing—fast-paced…but smart and well observed.” —Newsday “[A] nail-biting must-read.” —Seventeen “Breathless, cinematic action.” —Publishers Weekly “Heart pounding to the very last moment.” —Kirkus Reviews “Exclamation-worthy.” —Romantic Times “James Dashner’s illuminating prequel [The Kill Order] will thrill fans of this Maze Runner [series] and prove just as exciting for readers new to the series.” —Shelf Awareness, Starred “Take a deep breath before you start any James Dashner book.” —Deseret News

Book two in the blockbuster Maze Runner series that spawned a movie franchise and ushered in a worldwide phenomenon! This special movie tie-in edition includes

Thomas was sure that escape from the Maze meant he and the Gladers would get their lives back ... but no one knew what was waiting outside. The earth is a waste

The first book in the blockbuster phenomenon The Maze Runner series now features chapters from the highly-anticipated series conclusion, The Fever Code, the boo

The book that began the #1 New York Times bestselling Maze Runner series is now a major motion picture, as well as its sequel, The Scorch Trials, from Twentieth

When the crime wave peaked in the early 70s, and Nixon signed the Redemption Act, no one bothered to imagine what public execution might look like fifty years i