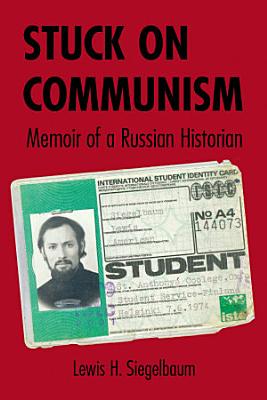 This memoir by one of the foremost scholars of the Soviet period spans three continents and more than half a century—from the 1950s when Lewis Siegelbaum's father was a victim of McCarthyism up through the implosion of the Soviet Union and beyond. Siegelbaum recreates journeys of discovery and self-discovery in the tumult of student rebellion at Columbia University during the Vietnam War, graduate study at Oxford, and Moscow at the height of détente. His story takes the reader into the Soviet archives, the coalfields of eastern Ukraine, and the newly independent Uzbekistan. An intellectual autobiography that is also a biography of the field of Anglophone Soviet history, Stuck on Communism is a guide for how to lead a life on the Left that integrates political and professional commitments. Siegelbaum reveals the attractiveness of Communism as an object of study and its continued relevance decades after its disappearance from the landscape of its origin. Through the journey of a book that is in the end a romance, Siegelbaum discovers the truth in the notion that no matter what historians take as their subject, they are always writing about themselves.

Gil Gamesh, the only pitcher who ever literally tried to kill the umpire. The ex-con first baseman, John Baal, "The Babe Ruth of the Big House," who never hit a

Journalism in Transition - Is the Czech Press developing into a democratic media market?

This book examines the rise of the German Communist Party in the crucial period between the Kapp Putsch and the stabilization of the Weimar Republic. Based on e

Dislocation and the need for radical reorientation are central experiences in 20th-century German history. Much of German culture has also consisted of reflecti

The Crisis of the German Left

Using Nietzsche's categories of monumentalist, antiquarian and critical history, the author examines the historical and theoretical contexts of the collapse of