An Assessment of Cameroons Wind and Solar Energy Potential: A Guide for a Sustainable Economic Development 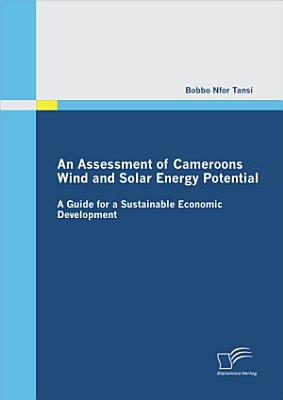 Cameroon has vast renewable energy resource potentials, with a hydropower potential of about 55, 200MW, second only to the Democratic Republic of Congo in Africa. So far, its energy needs are met by 4.8% hydropower (which accounts for less than 5% of its total hydropower potential), 0% wind and 0% solar. Cameroons? energy sector still goes through insufficient electrical energy production, especially during the heart of the dry season, which runs from December through March. Coincidentally, the wind and solar power potentials for Cameroon are at their peak during these months and could conveniently supplement for the shortfalls in generation during these periods. In this research, technical analyses were carried out to determine the wind and solar energy resource potentials for Cameroon using the RETScreen software tool provided by CANMET Canada. These analysis revealed that the northern regions of Cameroon had higher wind and solar resource potentials than any other location in Cameroon. A 2MW installed wind energy capacity would be capable of generating well over 1.5GWh electrical energy per year, while a 2KW installed solar energy capacity will be capable of generating well over 3MWh electrical energy per year. In the final sections, financial analysis were carried out to determine the economic viability of such projects and the possibility for self-financing. Emission analyses were also done based on the ability for such projects to offset greenhouse gas emissions and ensure sustainability in the energy sector. The analysis for Maroua revealed that 78.6tCO2/yr for wind and 0.1tCO2/yr for solar could be reduced by those installations. Finally, the legislations and legal frameworks governing the energy sector in Cameroon were dissected to determine possible weaknesses and constraints limiting the use, promotion and development of the full potential of Cameroon?s renewable energy resources.