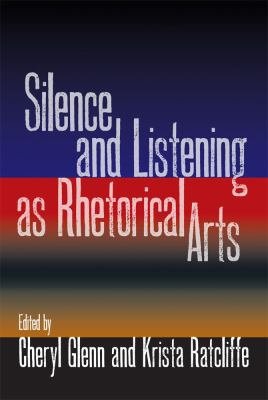 In Silence and Listening as Rhetorical Arts,editors Cheryl Glenn and Krista Ratcliffe bring together seventeen essays by new and established scholars that demonstrate the value and importance of silence and listening to the study and practice of rhetoric. Building on the editors’ groundbreaking research, which respects the power of the spoken word while challenging the marginalized status of silence and listening, this volumemakes a strong case for placing these overlooked concepts, and their intersections, at the forefront of rhetorical arts within rhetoric and composition studies. Divided into three parts—History, Theory and Criticism, and Praxes—this book reimagines traditional histories and theories of rhetoric and incorporates contemporary interests, such as race, gender, and cross-cultural concerns, into scholarly conversations about rhetorical history, theory, criticism, and praxes. For the editors and the other contributors to this volume, silence is not simply the absence of sound and listening is not a passive act. When used strategically and with purpose—together and separately—silence and listening are powerful rhetorical devices integral to effective communication. The essays cover a wide range of subjects, including women rhetors from ancient Greece and medieval and Renaissance Europe; African philosophy and African American rhetoric; contemporary antiwar protests in the United States; activist conflict resolution in Israel and Palestine; and feminist and second-language pedagogies. Taken together, the essays in this volume advance the argument that silence and listening are as important to rhetoric and composition studies as the more traditionally emphasized arts of reading, writing, and speaking and are particularly effective for theorizing, historicizing, analyzing, and teaching. An extremely valuable resource for instructors and students in rhetoric, composition, and communication studies, Silence and Listening as Rhetorical Arts will also have applications beyond academia, helping individuals, cultural groups, and nations more productively discern and implement appropriate actions when all parties agree to engage in rhetorical situations that include not only respectful speaking, reading, and writing but also productive silence and rhetorical listening.

In Silence and Listening as Rhetorical Arts,editors Cheryl Glenn and Krista Ratcliffe bring together seventeen essays by new and established scholars that demon

In Silence and Listening as Rhetorical Arts,editors Cheryl Glenn and Krista Ratcliffe bring together seventeen essays by new and established scholars that demon

Rhetoric and feminism have yet to coalesce into a singular recognizable field. In this book, author Cheryl Glenn advances the feminist rhetorical project by int

In our talkative Western culture, speech is synonymous with authority and influence while silence is frequently misheard as passive agreement when it often sign

Even a brief comparison with its canonical counterparts demonstrates that the Gospel of Luke is preoccupied with the power of spoken words; still, words alone d

In A New Writing Classroom, Patrick Sullivan provides a new generation of teachers a means and a rationale to reconceive their approach to teaching writing, cal

Criminals as Heroes in Popular Culture

This book delves into humanity’s compulsive need to valorize criminals. The criminal hero is a seductive figure, and audiences get a rather scopophilic pleasu

The nature of silence is hard to grasp. This book serves to systematize this concept and explore it in the works of three major poets of religious experience: n