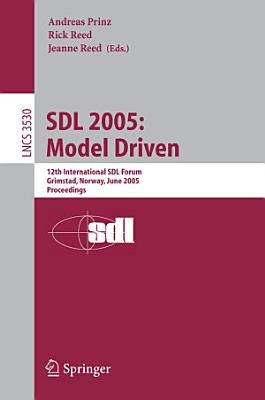 This volume contains the papers presented at the 12th SDL Forum, Grimstad, Norway. The SDL Forum was ?rst held in 1982, and then every two years from 1985. Initially the Forum was concerned only with the Speci?cation and Description Language that was ?rst standardized in the 1976 Orange Book of the Inter- tional Telecommunication Union (ITU). Since then, many developments took place and the language has undergone several changes. However, the main underlying paradigm has survived, and it is the reason for the success of the Speci?cation and Description Language in many projects. This paradigm is based on the following important principles of distributed - plications: Communication: large systems tend to be described using smaller parts that communicate with each other; State: the systems are described on the basis of an explicit notion of state; State change: the behavior of the system is described in terms of (local) changes of the state. The original language is not the only representative for this kind of paradigm, so the scope of the SDL Forum was extended quite soon after the ?rst few events to also include other ITU standardized languages of the same family, such as MSC, ASN.1 and TTCN. This led to the current scope of System Design Languages coveringallstagesofthedevelopmentprocessincludinginparticularSDL,MSC, UML, ASN.1, eODL, TTCN, and URN. The focus is clearly on the advantages to users, and how to get from these languages the same advantage given by the ITU Speci?cation and Description Language: code generation from high-level speci?cations.

This volume contains the papers presented at the 12th SDL Forum, Grimstad, Norway. The SDL Forum was ?rst held in 1982, and then every two years from 1985. Init

This book constitutes the proceedings of the 17th International System Design Language Forum, SDL 2015, held in Berlin, Germany, in October 2015. The 15 full pa

This book constitutes the refereed proceedings of the Third European Conference on Model Driven Architecture: Foundations and Applications, ECMDA-FA 2007, held

This volume contains the final versions of the technical papers presented at MoDELS 2005 in Montego Bay, Jamaica, October 2–7, 2005.

This book constitutes the refereed proceedings of the 5th International Workshop on System Analysis and Modelling, SAM 2006, held in Kaiserslautern, Germany in

The eagerly awaited Pattern-Oriented Software Architecture (POSA) Volume 4 is about a pattern language for distributed computing. The authors will guide you thr

This book constitutes the refereed proceedings of the 16th System Design Languages Forum, SDL 2013, held in Montreal, QC, Canada, in June 2013. The 16 revised,