Restoring the First-century Church in the Twenty-first Century 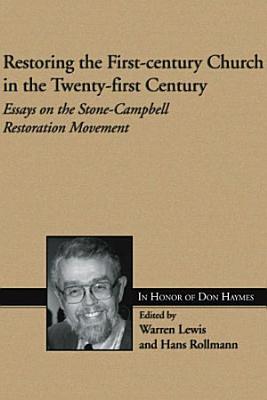 'Restoring the First-century Church in the Twenty-first Century: Essays on the Stone-Campbell Restoration Movement in Honor of Don Haymes' is a snap-shot of a major American religious movement just after the turn of the millennium. When the ÒDisciplesÓ of Alexander Campbell and the ÒChristiansÓ of Barton Warren Stone joined forces early in the 19th century, the first indigenous ecumenical movement in the United States came into being. Two hundred years later, this American experiment in biblical primitivism has resulted in three, possibly four, large segments. Best known is the Christian Church (Disciples of Christ), active wherever ecumenical Christians gather. The denomination is typically theologically open, having been reshaped by theological Liberalism and the Social Gospel in the twentieth century, and has been re-organized on the model of other Protestant bodies. The largest group, the Churches of Christ, easily distinguished by their insistence on 'a cappella' music (singing only), is theologically conservative, now tending towards the evangelical, and congregationally autonomous, though with a denominational sense of brotherhood. The Christian Churches/Churches of Christ (Independent) are a 'via media' between the two other bodies: theologically conservative and evangelical, congregationally autonomous, pastorally oriented, and comfortable with instrumental music. The fourth numerically significant group, the churches of Christ (Anti-Institutional), is a conservative reaction to the 'a cappella' churches, much in the way that the Southern ''a capella' churches reacted against the emerging intellectual culture and social location, instrumental music and institutional centrism of the Northern Disciples following the Civil War. Besides these four, numerous smaller fragments, typically one-article splinter groups, decorate the history of the Restoration Movement: One-Cup brethren, Premillennialists, No-Sunday-School congregations, No-Located-Preacher churches, and others. This movement to unite Christians on the basis of faith and immersion in Jesus Christ, and to restore New-Testament Christianity, is too little recognized on the American religious landscape, and it has been too little studied by the academic community. This volume is focused primarily on the 'a cappella' churches and their interests, but implications for the entire Stone-Campbell Restoration Movement abound. The voices that speak freely within were unimpeded in authoring these essays by standards of orthodoxy imposed from without. All of the contributors are acquainted with Don Haymes, the honoree of the volume, and have been inspired by this friend and colleague, a man with a rigorous and earthy intellect and a heavenly spirit. David Bundy, series editor Studies in the History and Culture of World Christianities

Restoring the First-century Church in the Twenty-first Century

'Restoring the First-century Church in the Twenty-first Century: Essays on the Stone-Campbell Restoration Movement in Honor of Don Haymes' is a snap-shot of a m

Can society function without a common standard of weights and measures, currency, and time-keeping? Is competition in athletics possible without rules? But what

Confessing Christ in the Twenty-first Century

Confessing Christ in the Twenty-First Century, written for the layperson and for those who lead and teach them, challenges the readers to think about how their

Trauma and Recovery in the Twenty-First-Century Irish Novel

The desire to engage and confront traumatic subjects was a facet of Irish literature for much of the twentieth century. Yet, just as Irish society has adopted a

Preaching With Relevance In the Twenty-First Century Church

What do Christianity and librarianship have in common? Netherlands Prime Minister and theologian Abraham Kuyper (1837-1920) was among the first in the modern er

A Church for the Twenty-first Century

Eastern Christianity and Politics in the Twenty-First Century