Living on a Meme 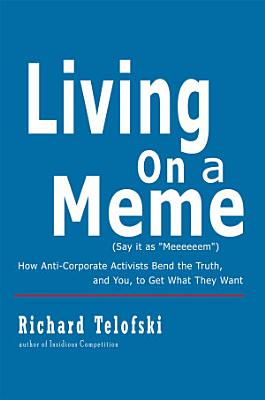 Living on a Meme - How Anti-Corporate Activists Bend the Truth, and You, to Get What They Want is about the NGOs and activist groups that engage corporations adversarially and how they use meme to further their anti-corporate agendas. What s meme? Say the word as meeeeeem. The dictionary says that a meme is an idea that spreads from one person to another. And thanks to today s Internet, memes get started, spread, and believed in a flash, whether they are true or not, making them formidable tools for groups that damage company reputations. Here in his fifth book, author Richard Telofski takes an in-depth look at anti-corporate NGOs and activist groups that use memes cleverly to compete with the image of the companies they target. These groups unabashedly use unchallenged memes to bribe people to their side of their anti-corporate argument. Bribe? Yes. By leveraging a meme, these groups bribe people with something, a way to feel better about themselves, often with scant or no support of the meme. Through their meme-mangling, adversarial NGOs and activists can impose undeserved damage on corporate reputations, costing market share, revenue, and jobs, maybe one of them yours. These organizations are truly competitors, not only to the individual corporations that they target, but also to the economic system in general. Living on a Meme is compiled from a selection of articles published on Richard s Web site, Telofski.com, between August 1, 2009 through August 3, 2010. But, many of these writings are more essay than article. Within the essays in this book, you ll find insights, theories, as well as specific facts and analysis on how certain NGOs and activist groups operate online and offline to sap companies of their vital reputation. By reading this book, you ll discover how these irregular competitors make use of existing cultural memes, true or not, and how they contribute to those memes, strengthening them and contributing to the degradation of a company s image. Don t worry. This book isn t just a repackaging of blog postings. You re going to get more than that. At the end of each chapter you will find bonus Take-Aways. Those Take-Aways are critical analyses of the essays in the chapter, pointing out for you how what was just discussed relates to an NGO s or activist s reliance of living on a meme or their hope that YOU are living on THEIR meme for them. You ll also find in this book 23 exclusive essays that appear only in this book. So, start your journey now into the understanding of how anti-corporate NGOs and activists bend the truth, and the beliefs of people, to get what they want. "

Living on a Meme

Living on a Meme - How Anti-Corporate Activists Bend the Truth, and You, to Get What They Want is about the NGOs and activist groups that engage corporations ad

Any theory deserves to be given its best shot, and that is what Susan Blackmore has given the theory of the meme I am delighted to recommend her book.' Richard

No one can argue against wanting a better quality of life—and Principles of Sustainable Living: A New Vision for Health, Happiness, and Prosperity provides ke

My Life as a Meme

Book 8 of the much-loved My Life series Derek Fallon loves making funny memes, but when he finds himself the joke of a viral meme, he realizes how easy it is to

The first goal of this book is to extend Two Minds originating from behavioral economics to the domain of interaction, where the time dimension has to be dealt

The Variety of Integral Ecologies

Presents integral approaches to ecology that cross the boundaries of the humanities, social sciences, and biophysical sciences. In the current era of increasing

Memes and Internet satire are everywhere online. They come and go so quickly, it's hard to understand what they even mean. Readers take a closer look at this mo

The Myths We Live by

In this work, Mary Midgley argues that myth, far from being in opposition to, is actually part and parcel of science. According to Midgley, myths are neither li

Collection of essays on investing, healthcare, and life from the unique perspective of Dr. Joon Yun, a renown investor and thinker. Dr. Yun is President of Palo