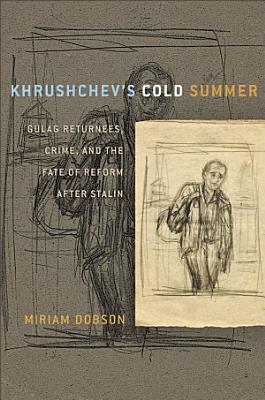 Between Stalin's death in 1953 and 1960, the government of the Soviet Union released hundreds of thousands of prisoners from the Gulag as part of a wide-ranging effort to reverse the worst excesses and abuses of the previous two decades and revive the spirit of the revolution. This exodus included not only victims of past purges but also those sentenced for criminal offenses. In Khrushchev's Cold Summer Miriam Dobson explores the impact of these returnees on communities and, more broadly, Soviet attempts to come to terms with the traumatic legacies of Stalin's terror. Confusion and disorientation undermined the regime's efforts at recovery. In the wake of Stalin's death, ordinary citizens and political leaders alike struggled to make sense of the country's recent bloody past and to cope with the complex social dynamics caused by attempts to reintegrate the large influx of returning prisoners, a number of whom were hardened criminals alienated and embittered by their experiences within the brutal camp system. Drawing on private letters as well as official reports on the party and popular mood, Dobson probes social attitudes toward the changes occurring in the first post-Stalin decade. Throughout, she features personal stories as articulated in the words of ordinary citizens, prisoners, and former prisoners. At the same time, she explores Soviet society's contradictory responses to the returnees and shows that for many the immediate post-Stalin years were anything but a breath of spring air after the long Stalinist winter.

Between Stalin's death in 1953 and 1960, the government of the Soviet Union released hundreds of thousands of prisoners from the Gulag as part of a wide-ranging

The Gulag After Stalin

In The Gulag after Stalin, Jeffrey S. Hardy reveals how the vast Soviet penal system was reimagined and reformed in the wake of Stalin’s death. Hardy argues t

Popular uprisings in Poland and Hungary shake Moscow's hold on its eastern European empire. Across the American South, and in the Union of South Africa, black p

Crime and Punishment in Russia

Crime and Punishment in Russia surveys the evolution of criminal justice in Russia during a span of more than 300 years, from the early modern era to the presen

The first English-language book to document the men who emerged from the gulags to become Russia’s much-feared crime class: the vory v zakone Mark Galeotti is

In the Labyrinth of the KGB

This book focuses on the writers who lived through the processes of de-Stalinization and re-Stalinization during the 1960s and 1970s in Soviet Ukraine. The auth

Drawing on newly available materials from the Soviet archives, Polly Jones offers an innovative, comprehensive account of de-Stalinization in the Soviet Union d

Obshchestvennost’ and Civic Agency in Late Imperial and Soviet Russia

In modernizing Russia, obshchestvennost', an indigenous Russian word, began functioning as a term to illuminate newly emerging active parts of society and their

How do world leaders manage the competing priorities of maintaining support at home and credibility in the international arena? In Khrushchev's Double Bind Jame

This groundbreaking book's analysis of the dual impact of World War II and the death of Stalin on the USSR, its reappraisal of the status of property and owners