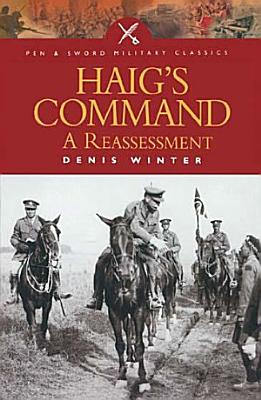 This book sets out to expose and analyse a major historical fraud. The author's theme is the Western Front in Haig's time - from the Somme to the armistice. Using evidence that the documents from which previous histories have been written are tampered-with and often entirely rewritten versions of the truth - for example, a daily war diary was kept by all units up to GHQ and these were often altered by the Cabinet Office and crucial appendices totally removed. Cabinet war minutes were likewise rewritten, with reference to whole meetings often removed. Records such as Haig's own diary were also tampered with, and Denis Winter even claims to have found documents which the war's official historian thought he had deliberately destroyed in the 1940s.

This book sets out to expose and analyse a major historical fraud. The author's theme is the Western Front in Haig's time - from the Somme to the armistice. Usi

Command and Control in Military Crisis

Harald Hoiback's study focuses upon two events - the 1918 Allied meeting at Doullens when the Allies ceded control to an officer, and the Norwegian decision in

"British generals of the First World War have ... played key roles in a complex, painful process, but their contribution has been neglected and often they have

This is a comparative study of the fighting systems of the British and German armies in The Great War. Taking issue with revisionist historians, Samuels argues

Includes 27 maps “History of the four active service battalions in the Great War with details of officers’ services during the war. The Coldstream Guards ha

Haig: A Re-Appraisal 80 Years On

Field Marshal Earl Haig's reputation continues to arouse as much interest and controversy as ever. This volume represents the collaboration of two leading histo

During the First World War, the British army's most consistent German opponent was Crown Prince Rupprecht of Bavaria. Commanding more than a million men as a Ge

A thoughtful reassessment' - Stand To! 'Sharp and clear...swift and surefooted' - The Scotsman 'A careful biographer' - Times Literary Supplement 'Those new to