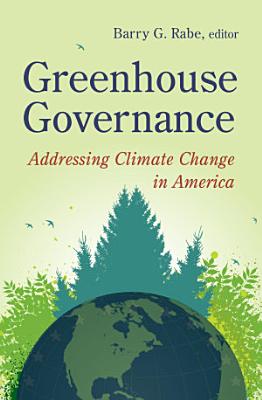 Public deliberation over climate change has traditionally been dominated by the natural and physical sciences. Is the planet warming? To what degree, and is mankind responsible? How big a problem is this, really? But concurrent with these debates is the question of what should be done. Indeed, what can be done? Issues of governance, including the political feasibility of certain policies and their capacity for implementation, have received short shrift in the conversation. But they absolutely must be addressed as we respond to this unprecedented challenge. Greenhouse Governance brings a much-needed public policy mindset to discussion of climate change in America. Greenhouse Governance features a number of America's preeminent public policy scholars, examining some aspect of governance and climate change. They analyze the state and influence of American public opinion on climate change as well as federalism and intergovernmental relations, which prove especially important since state and local governments have taken a more active role than originally expected. Specific policy issues examined include renewable electricity standards, mandating greater vehicle fuel economy, the "adaptation vs. mitigation" debate, emissions trading, and carbon taxes. The contributors do consider the scientific and economic questions of climate policy but place special emphasis on political and managerial issues. They analyze the role of key American government institutions including the courts, Congress, and regulatory agencies. The final two chapters put the discussion into an international context, looking at climate governance challenges in North America, relations with the European Union, and possible models for international governance. Contributors include Christopher Borick, Muhlenberg College; Martha Derthick, University of Virginia; Kirsten Engel, University of Arizona; Marc Landy, Boston College; Pietro Nivola, Brookings Institution; Paul Posner, George Mason University; Leigh Raymond, Purdue University; Walter Rosenbaum, University of Florida; Ian Rowlands, University of Waterloo; Henrik Selin, Boston University; Stacy VanDeveer, University of New Hampshire

Public deliberation over climate change has traditionally been dominated by the natural and physical sciences. Is the planet warming? To what degree, and is man

The change in greenhouse operation and technology in the last 20 years has been unprecedented. Photoperiodic control, mist propagation, green house cooling, cle

Program management is a rapidly emerging offshoot of project management. So much so that AT&T, IBM, and other organizations, both large and small in all sectors

State climate and clean energy policy will play a critical role in the future of the political dialogue and economic development. Policymakers from around the w

This book examines why authoritarian governments are willing to address environmental problems that have an international impact, such as CO2 emissions, but are