The Archaeology of Mesoamerican Animals 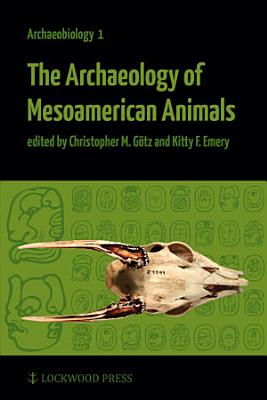 Recognition of the role of animals in ancient diet, economy, politics, and ritual is vital to understanding ancient cultures fully, while following the clues available from animal remains in reconstructing environments is vital to understanding the ancient relationship between humans and the world around them. In response to the growing interest in the field of zooarchaeology, this volume presents current research from across the many cultures and regions of Mesoamerica, dealing specifically with the most current issues in zooarchaeological literature. Geographically, the essays collected here index the different aspects of animal use by the indigenous populations of the entire area between the northern borders of Mexico and the southern borders of lower Central America. This includes such diverse cultures as the north Mexican hunter-gatherers, the Olmec, Maya, Mixtec, Zapotec, and Central American Indians. The time frame of the volume extends from the earliest human occupation, the Preclassic, Classic, Postclassic, and Colonial manifestations, to recent times. The book's chapters, written by experts in the field of Mesoamerican zooarchaeology, provide important general background on the domestic and ritual use of animals in early and classic Mesoamerica and Central America, but deal also with special aspects of human-animal relationships such as early domestication and symbolism of animals, and important yet otherwise poorly represented aspects of taphonomy and zooarchaeological methodology. Spanish-language version also available (ISBN 978-1-937040-12-3).

The Archaeology of Mesoamerican Animals

Recognition of the role of animals in ancient diet, economy, politics, and ritual is vital to understanding ancient cultures fully, while following the clues av

Host Bibliographic Record for Boundwith Item Barcode 30112087465842 and Others

Borges and the Literary Marketplace

Key to the Spanish Teacher