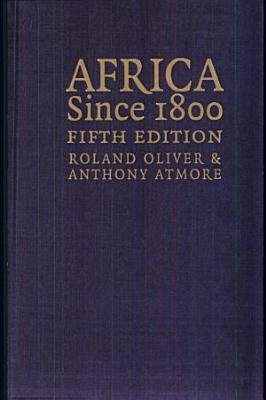 This book begins by looking at the peoples of Africa at the turn of the eighteenth and nineteenth centuries, and goes on to study the commercial and ideological penetration of Africa by the outside world. The partition and colonisation of Africa by the European powers are discussed, and there is comprehensive discussion of the colonial rule between 1885 and 1960. The last third of the book is concerned with the history of independent Africa during the last years of the twentieth century. The new edition covers events up to the middle of 2003, and takes account of the fresh perspectives brought about by the end of the Cold War and the new global situation following the events of September 11, 2001. It is also concerned with the demographic trends, with the ravages of diseases such as AIDS and malaria, and with the conflicts waged by warlords.

This book begins by looking at the peoples of Africa at the turn of the eighteenth and nineteenth centuries, and goes on to study the commercial and ideological

Africa, Asia, and South America Since 1800

A reference for graduate and undergraduate students presenting the bibliographic details and sometimes describing and evaluating the content of over 5,000 books

In this completely revised and rewritten edition, the history of the subcontinent has been carried forward to the 1980s, and account has been taken of the major

A History of Africa Since 1800

History of West Africa Since 1800

Africa and the Wider World: East, central, and southern Africa since 1800

Authors: Unesco. International Scientific Committee for the Drafting of a General History of Africa
Categories: History

Looks at the history of Africa since 1935 and Africa's relations with other continents during that time period.